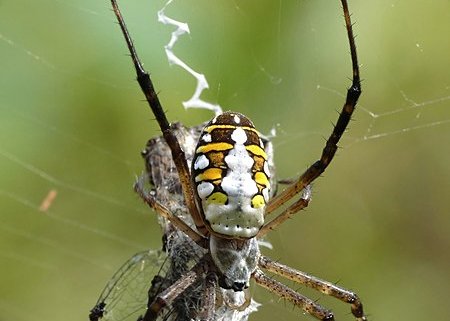 These small spiders are less than an inch in length, with the females much larger than the males. They are both medium brown in color with occasional dark marks on the abdomen.

These spiders are native to Asia, Australia, Africa, and the coastal Mediterranean areas of Europe. They were only recently introduced to Florida and first discovered there in the early 2000s.

Colonial tent web orb weaver spiders are generally found outside, where they build large, ornate webs in the garden or around homes.

What does a colonial tent web orb weaver spider look like?

Colonial tent web orb weaver spiders are some of the smallest around. They are light brown and many can change the background color of the abdomen from a very pale shade to one that is very dark. Males tend to stay on the darker side while females stay lighter, a feature that helps to camouflage them against dead leaves.

These spiders have very long legs and produce circular webs.

What is the habitat of a colonial tent web orb weaver spider in Florida?

Orb weavers, including the colonial tent web orb weaver spider, can be found throughout the world – everywhere except the Arctic and Antarctica, in fact. These large, colorful spiders usually spin their webs between buildings, shrubs, and other types of vegetation.

They are most often spotted in the summertime, typically in garden areas and around the home but rarely inside the home. They frequently use the edge of waves to build the tops of their webs.

What are the behaviors of a colonial tent web orb weaver spider?

There aren’t many spiders that are social, but the colonial tent web orb weaver is one of them! These spiders prefer to live in close proximity to share frame threads for their webs, to guard against predators, and to improve their ability to capture prey.

Orb weavers spin complex webs in concentric circles-  usually outdoors and in the garden – where they then wait for their prey. They have very poor vision and rely instead on the vibrations of the web for them to be able to see their prey.

How dangerous is a colonial tentweb orbweaver spider?

Colonial tent web orb weaver spiders are not dangerous to humans. The biggest nuisance is the webs they produce, but since these spiders are usually found outside, you can leave them be. They are also known as garden spiders and build large webs to catch their prey.

These spiders are not aggressive, instead feeding on insects that can be problematic in the garden. They’re doing us a favor!

What should I do if I’m bitten by a colonial tentweb orbweaver spider?

These spiders very rarely bite. If you are bitten by one of these spiders, know that the venom is not toxic. These spiders are more of a nuisance when they build large, inconvenient places – besides that, they are not formidable nor are they dangerous.

1. Fact: The Larger the Spider, the More Eggs She Will Produce

One interesting fact about orb weavers is that, the larger the female is, the more eggs she will produce – and the more offspring she’ll also have!

Although orb weaver spiderlings (or baby spiders) can’t fly, it’s easy to see why this myth abounds. When spiderlings start to mature, they disperse from their mothers in the fall in a process known as ballooning, where they take to the air on a windy day and then land somewhere else to start their own lives.

3. Fact: Some Spiders Will Eat Their Entire Webs Overnight

Talk about a long-term construction project! Colonial tent web orb weaver spiders are known for doing much of their building and repair work on the webs overnight. They’ll tear down and eat most of the web as the morning starts to dawn! Some scientists speculate that this is to consume moisture from dew or to prevent large animals, like birds, from getting stuck in the web.

4. Myth: Colonial Tentweb Orbweavers Only Build webs in the Summer and Fall

They build webs year-round, but they are most often noticed in the late summer and fall since that’s when the adult spiders have reached their largest size and will construct the largest webs.

5. Fact: Female Orbweavers Will Eat the Males After Reproducing

Male orb weavers are much smaller than females. Because of this, it’s not uncommon for them to serve as a tasty snack after mating. Yikes!