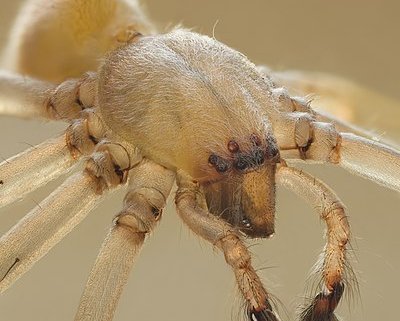 One of the most common spiders in Florida, the common house spider is brown and tan with dark brown highlights. It is about the size of a nickel when measured with its legs outstretched.

Though native to South America and most abundant in Mexico and Central America, this is a species that is found just about everywhere in the United States, particularly in Florida. It has a worldwide distribution, having been transported to various destinations on plants.

Common house spiders sit in their webs and wait for prey to come to them. They feed on a variety of insects, including cockroaches and flies.

Common house spiders are small, about the size of an American nickel. They are dark brown to tan with brown highlights but can also be more yellow in color. The legs are brown to yellow with dark rings, and the abdomen is higher than it is long.

The abdomens can also be described as spherical. They are gray with white and black pigments along with a single white spot. Males are smaller and darker than the females.

These spiders can usually be found in compact, disorderly cobwebs.

What is the habitat of a common house spider in Florida?

These spiders are found all over the world, including most places in Florida. They build webs both inside and outside of buildings. Common hiding spots include barns, sheds, outhouses, stables, and beneath bridges and culverts.

What are the behaviors of a common house spider?

Common house spiders produce complex tangled webs. They are often constructed between two adjoining edges of a building (like between a wall and an eave). You’re likely to find many of these spiders all in the same area, building large, interconnected webs that cover a large surface area.

They can build webs both indoors and outside. They feed on a variety of prey, including scorpions and cockroaches. While they wait for the prey, they sit in the center of the web. Males often hang out in the webs of females, waiting for the females to catch food that they can share.

Just one female can produce dozens of egg sacs throughout the year, all of which will be hung on the web.

How dangerous is a common house spider?

Common house spiders do have venom in their fangs but fortunately, this venom shouldn’t affect you in any way. It is used to paralyze prey, as is the case with most species of spiders. The fangs on a common house spider are extremely small and the amount of venom that they contain is so small, especially relative to your size as a human.

While you might suffer from an allergic reaction to the bite, even this is relatively uncommon.

Instead, if you see a common house spider in your home, you may want to leave it be. These spiders eat a wide variety of insect pests that might actually be harmful to you, including flies.

1. Myth: Common House Spiders Will Bite You While You Sleep.

That’s not true! While a common house spider might bite if you accidentally poked it or rolled on it while you were sleeping, this isn’t very likely. These spiders much prefer to sit in their webs and wait for food to come to them than they do to go hunting.

These spiders are about as far from aggressive as it gets!

Because late summer is when most people notice common house spiders, they assume that this is the only time they come inside. That’s not the case! It’s just that, before then, these spiders are usually in their juvenile stage and too small to be noticed.

3. Myth: It’s Best to Put a Common House Spider Outdoors if You Find It in the House.

If you see a spider in your house, resist the urge to relocate it. Most house spiders will have a hard time surviving outdoors if they’re already used to the indoor environment.

4. Fact: Most House Spider Webs are Easy to Miss.

Blink and you’ll miss them! Most house spider webs are so small that you’ll have a hard time seeing them. They’re usually found in corners.

5: Fact: Common House Spiders Like to Be Near Friends.

…for the most part! Common house spiders often share webs close together – or even the same web. However, if they get too close, they’re likely to attack each other.