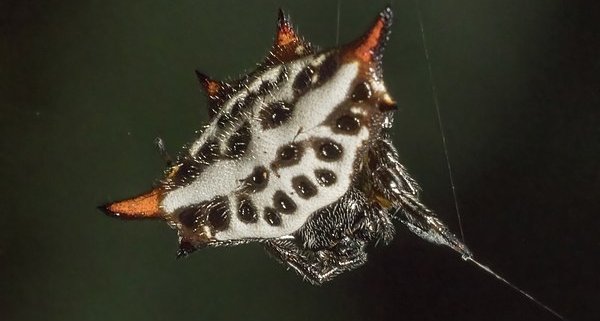 Also known as the crab-like orbweaver and the spiny backed orbweaver, this spider is small, coming in at less than half an inch in size. It has a hard and broad abdomen that can be orange, white, or yellow, usually with distinctive red markings.

Spiny orb weaver spiders are found all over the southeast portions of the United States as well as in California. Here, they tend to inhabit shrubby areas, gardens, and the edges of woodlands, but can also be found in cultivated areas like citrus groves and nurseries.

Spiny orb weaver spiders generally spin their webs in trees, shrubs, and other outdoor areas like porches and patios. They rarely enter homes and eat all kinds of outdoor pests like flies and mosquitoes.

What does a spiny orb weaver spider look like?

Spiny orb weaver spiders are colorful and easy to recognize. They have an abdomen that is broad and hard along with distinctive red spines. They can be found in a  variety of colors, including white, yellow, or orange. These spiders are one of many different types of orbweavers, all of which come in a variety of sizes and shapes.

What is the habitat of a spiny orb weaver spider in Florida?

In Florida, spiny orb weavers create round, flat webs in trees, shrubs, and in the corners of windows. They rarely venture indoors, preferring instead to take shelter in outdoor areas.

If you do detect one of these spiders in your home, it likely hitched a ride in on a potted plant or another type of outdoor item.

What are the behaviors of a spiny orb weaver spider?

Spiny orb weaver spiders build distinctive webs. They often have tufts of silk that prevent birds from being confused and flying into them. When these spiders catch their prey, they paralyze their prey and then consume the liquefied insides of their catch.

These spiders have dense spines that are believed to serve as a sort of protection against predator attacks. The irony of this is that these spiders are so tiny, they’re rarely even seen by predators!

They have a unique mating behaviors in which males seek out females by visiting their webs. They then use a four-tap patterned drumming dance on the silk to get the female’s attention. It can take nearly an hour for mating to be complete, after which time, the male remains on the female’s web and the female produces an egg sac with up to 260 eggs.

How dangerous is a spiny orb weaver spider?

Though they appear to be quite formidable, spiny orb weaver spiders actually aren’t all that dangerous. The biggest threat they pose to humans is really more of a nuisance than anything else. They create large, messy webs, usually in places that are less than convenient for humans!

What should I do if I’m bitten by a spiny orb weaver spider?

These spiders can bite, but they aren’t normally aggressive. You won’t be bitten unless you pick one up or provoke one – and even if you are bitten, you shouldn’t have to worry about it. There are rarely symptoms or side effects. Consult a doctor if you can’t be certain that it was this type of spider that bit you.

These spiders don’t discriminate when it comes to the prey that gets trapped in their webs. They’ll eat anything! Spiny orb weaver spiders will eat everything from beetles to mosquitoes moths to whiteflies.

2. Myth: Spiny Orb Weavers Should Be Killed If Found Indoors

A common misconception is that one spiny orb weaver spider in the house will lead to a large population of many others. That’s not the case. These spiders only come inside accidentally, usually because they are carried in on a potted plant. These spiders aren’t dangerous and are beneficial, so they should not be killed whenever possible.

Of all the spider species out there, spiny orb weavers aren’t the most long-lived. These spiders generally only live for less than a year before they die.

Because they tend to be more active, you’re more likely to see a female spiny orb weaver spider, particularly if you start looking in the late fall. Males are most likely to be seen just during October and November.

Sorry, this one is another myth! Although these tiny spiders have a crab-like appearance, with their spiny abdomens, they are still arachnids.